The force-velocity curve is one of the most badly understood concepts in Strength and Conditioning.

Firstly, in classical mechanics there is no instantaneous force and instantaneous velocity. Many strength and conditioning coach assume there is. There is a universal relationship between instantaneous force and acceleration. This is Newton’s 2nd law: F=ma: force is directly proportional to acceleration. The existence of a relationship between force and velocity is a property of muscle – ie the FV relationship commonly talked about applies just to muscle. It is a large leap to assume that a relationship that is seen in individual muscle fibers will also be seen in the movement of the whole organism. But this is an assumption that is very common in strength and conditioning. This is especially strange as there are a number of bodily structures which can mitigate the FV relationship. For instance, the biarticular muscles can permit large joint excursions without experiencing much change in length. This means tension in them can be high even if the joints are changing angle quite fast. Similarly, muscle tissue is just one component of a muscle-tendon unit. Tendons can stretch even if the muscle doesn’t change length. This can allow both force and velocity to be high when considering the whole muscle-tendon unit. So that’s the theory, but does the body actually exhibit a force velocity relationship in different movements? It’s a really common to see graphs like this, showing where different exercises lie on the FV curve. But there are a few problems with this graph. 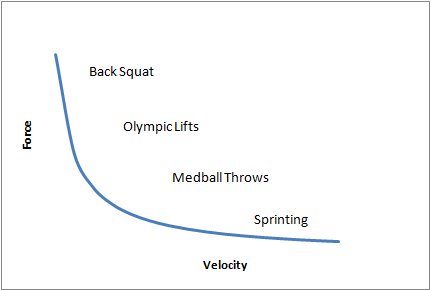 For instance, this graph says that force is higher during squatting than weightlifting. Is this true? Peak forces are pretty high during weightlifting. Similarly, peak forces are pretty high in maximal sprinting, and are just for one foot. It’s pretty easy to imagine that an elite sprinter has a peak Ground Force during sprinting that is much greater than half of their peak force in squatting. The graph should really be labeled as the load/velocity curve and then would make more sense. This is a classic mechanical misunderstanding – confusing load and force – they are not the same thing. When people talk about the force velocity relationship, they normally suggest that we should train at all points on the curve. But do we need to invoke this curve to give this training guideline? Can’t we express the same guideline by saying that athletes should train across a range of velocities or a range of external loads? I appreciate is doesn’t sound as pretty. So it is very difficult to answer our original question if we compare different movements. If we look at just one movement though, is there a force velocity – relationship? First, let’s remind ourselves of the force relationship in muscle – a hyperbolic relationship.

In squatting? A linear relationship (note differences in methods and populations account for different locations on lines).

In a power clean? Maybe no relationship.

What is important here is that in whole body movements force can still be substantial at higher velocities. The force – velocity relationship of muscle is mitigated by other factors.

So where are we?

1. A hyperbolic FV relationship is a property of muscle not movement.

2. Often a particular movement will also display a FV relationship but this relationship can be very different to that in isolated muscle fiber.

3. It is hard to establish where different exercises lie relative to each other on a FV curve. If it is possible the relationship is higly unlikely to be a curve.

4. Is peak force in squatting really greater that in weightlifting which is in turn greater than sprinting?

5. Do we really need to classify exercises on a FV curve to establish a training guideline around at a range of velocities or loads?

This site uses Akismet to reduce spam. Learn how your comment data is processed.